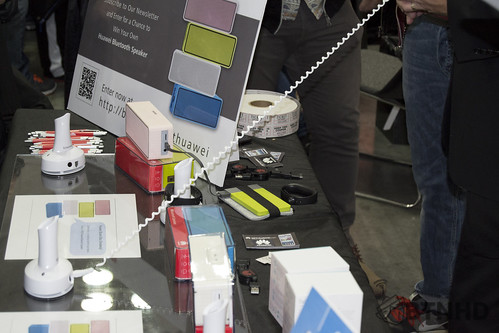 Yeah, you read the title correct. Huawei was showing off their new fitness tracker band at this year's Engadget Expand event, which is also a bluetooth headset for your smartphone devices. The device is pretty awesome and it's going to be available on November 14th, 2014.

The fitness band will be synced with your phone, which is going to be compatible with Android and iOS devices. When you get an incoming call you will be able remove the headset from your wristband and put it into your ear while out for a run or even driving in your car. The cool thing about the band it will continue logging your workout when you are using it as head-piece.

Other than using it as a Bluetooth headpiece the fitness tracker band will track your steps, distance and calories burned. Huawei‘s band will begin vibrating, as a security measure, if it’s more than 10 feet from its synced smartphone. Huawei stated that the device has a pretty solid battery life that can last for 3 days, and it takes two hours to recharge. I can’t wait to get this band in the shop to test out that statement. What I like the most about the band is that their isn’t a charging cradle like most wearable devices in the market. Huawei tracker band has its charging build in.