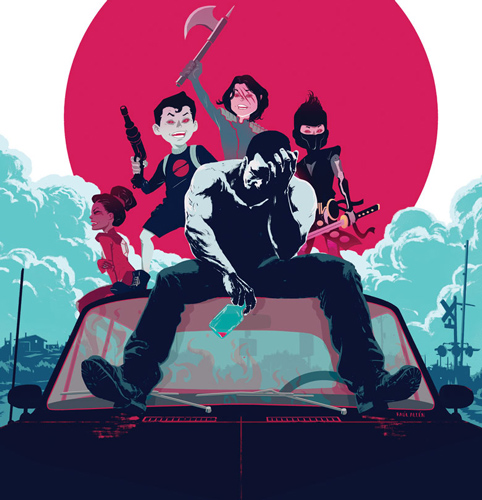 As revealed this weekend at C2E2 2015, Valiant is proud to reveal plans for BLOODSHOT REBORN #5 – a special, standalone spotlight issue unlike else you'll read all summer! This August, journey into the tormented psyche of the man once known as Bloodshot as New York Times best-selling writer Jeff Lemire (THE VALIANT, Descender) and special guest artist Raul Allen (Hawkeye) concludeBLOODSHOT REBORN's chart-topping first story arc by revealing the hallucinatory world of the cartoon sidekick called Bloodsquirt… But just what is this pint-sized killing machine and how long can it continue to destroy Bloodshot from the inside out?

The memories of the thousands of people he killed as Bloodshot aren’t the only things that haunt Ray Garrison. For months now, the specter of the Geomancer and a nightmarish cartoon known as Bloodsquirt have tormented him at every turn. First, on his television…and now in the real world…where Bloodsquirt acts out twisted fantasies that darkly mirror Bloodshot’s own violent past. Are these apparitions real or a just figment of Bloodshot’s broken psyche? And just who are the other members of Bloodsquirt’s “Squirt Squad”…and what could they possibly be planning next?