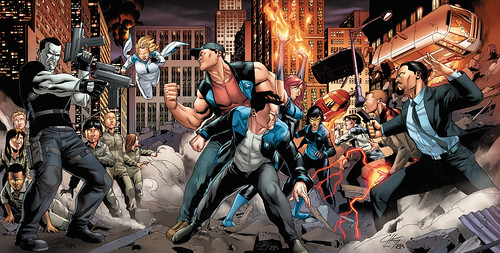 Valiant Entertainment and Sony Pictures today announced a deal to bring two of Valiant's award-winning comic book superhero franchises—BLOODSHOT and HARBINGER—to the big screen over the course of five feature films that will culminate in the shared universe crossover film, HARBINGER WARS.

BLOODSHOT, arriving in theaters in 2017, will kick off the five-picture plan leading to HARBINGER WARS and will be directed by David Leitch & Chad Stahelski (John Wick) from a script by Jeff Wadlow (Kick Ass 2) and Eric Heisserer (Story of Your Life). Neal H. Moritz and Toby Jaffe from Original Film (The Fast and the Furious franchise) and Dinesh Shamdasani from Valiant Entertainment will produce the film. Matthew Vaughn and Jason Kothari will serve as executive producers.

HARBINGER will follow shortly thereafter from a script by Eric Heisserer (Story of Your Life). Sony and Valiant remain tight-lipped about potential directors. Neal H. Moritz and Toby Jaffe from Original Film (The Fast and the Furious franchise) and Dinesh Shamdasani from Valiant Entertainment will produce.

Both BLOODSHOT and HARBINGER will be followed by sequels before the title characters confront each other head on in HARBINGER WARS—a motion picture directly inspired by Valiant’s critically acclaimed 2013 comic book crossover of the same name. Andrea Giannetti will oversee the five-picture HARBINGER WARS initiative for Sony Pictures.