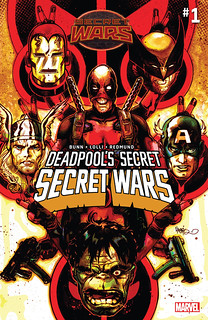 So it start with this image and all I noticed is Deadpool half burnt up, which is normal for him - but you see Captain America's shield, Thor's hammer and several body parts burned up too.

That’s when it cuts off and starts from the beginning. Many of good heroes were brought to a spaceship and Deadpool and Magento are part of the group. Like come on, you have the dude that wants to kill mankind and the ‘merc with the mouth’ considered as the “noble and just” (Captain America words).

Deadpool starts to get excited about killing some people, but then realizes his with the good guys that don’t kill – he then ask Wolverine how he controls his killer instinct.

Then out of nowhere, the heroes get transported to some odd place in which they start fighting with the Sinister Six –

Which leads to everyone being dead and Deadpool being the one one alive looking normal.

I can’t wait to read the next issue because this sneak peek at the end of the comic looks very interesting.