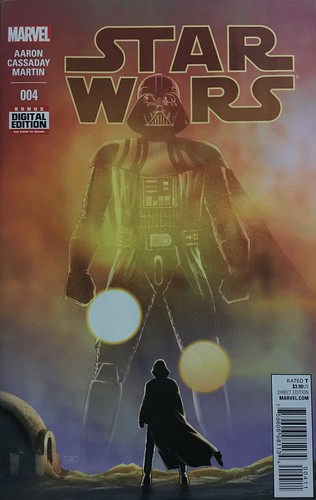 The Star Wars comic series are getting good. Even though I would prefer watching the movie, but waiting each month for the comic book to come out is very awarding and exciting. So far, Princess Leia Organa and her team of rebels have just completed a daring mission where they managed to infiltrate and destroy the largest imperial weapons factory in the galaxy. Their success was owed to the efforts of young Luke Skywalker, who at one point during the battle stood face to face with the unstoppable Darth Vader.

Luke finds no need to celebrate in the victory of destroying the weapons factory. He has seen the full power of the Force in action when he faced Darth Vader and is questioning himself whether he can become a true Jedi or not.

I’m enjoy how Darth Vader acts like the boss taking no crap from anyone in the series. He is and always will be the villain. As illustrated in this part – he tells Jabba that the negotiation is completed and he will do what the emperor commands and for payment we tell you how much to pay you; what a boos move!

Almost at the end, a so call “bounty hunter” is looking for Han Solo. Dude is always getting himself into trouble – come on! his Han Solo!

Finally, Luke Skywalker decided to leave Princess Leia Organa and Han Solo to search for himself where it all started Tattoine, which Darth Vader is actually already there conducting business with Jabba.

At the end of Star Wars issues #4, Boba Fett is looking for the Kenobi – isn’t he dead?