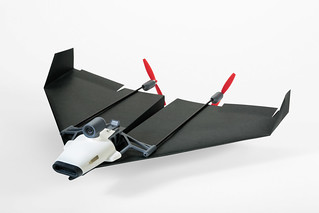 PowerUp Toys today announced the first public flight of the PowerUp FPV, the world’s first paper airplane drone with a live-streaming camera, during theDrone Rodeo at the 2016 International Consumer Electronics Show. Putting flyers into the cockpit of their own creation, Powerup FPV streams video of the flight experience straight to the user's smartphone with a range up to 300 ft, and allows them to control the experience with a VR headset, like Google Cardboard.

The PowerUp FPV, whose successful Kickstarter ends this week, was developed in partnership with Parrot, makers of the AR.Drone and Minidrones. Generating it’s own WiFi signal and controls, PowerUp FPV gives users a truly unique flight and viewing experience, to live stream the flight straight to a user’s smartphone. In addition, the fully rotating wide-view camera lets users capture their flight while looking forward from the cockpit, off the wings; or even take the ultimate “selfie” with a rear-view shot as users launch their planes and share them via WiFi straight to YouTube, Facebook, Twitter or favorite video sharing service.